I recently attended the memorial service of my cousin, John Bernard White, Sr.  As friends and family assembled at Cross Community Church in Palm Beach Gardens, Florida, I reconnected with cousins not seen in over 30 years.

We all witnessed a beautiful memorial service that celebrated the life of a distinguished leader, who positively impacted everyone he met.  Various family members, Church of God officials, and prominent attorneys from the community reflected on the influence of this spiritual giant.  While I sat in the auditorium, I reflected on the times in the early 1990’s when our paths crossed in Palm Beach County’s business community.

My Dad often reminisced how John’s grandparents, Hartley and Mira Lowe Roberts, helped raise him on Green Turtle Cay.  When Dad was three, his young father Howard past away.  Uncle Hartley and Aunt Mira took special interest in their little nephew and his widowed mother.

Dad often reminded John White that he pushed him around the New Plymouth settlement in a baby carriage.  Even though Dad and John White built successful careers in different countries, they stayed in contact and would make special effort to see each other during their travels.

Ironically, John White’s office was across the street from where I worked.  John and I would often see each at community events.  Several times I sat in his office and listened intently to his excellent career advice.  His outlook was always positive, witty and encouraging.   He truly made an impact on those who knew him.

At the memorial service, I noticed the photo below of John in his University of Miami marching band uniform.  His brother Roy elaborated on John’s tremendous musical talent.  As an accomplished clarinetist, John used his talent to earn scholarship funds for his education. 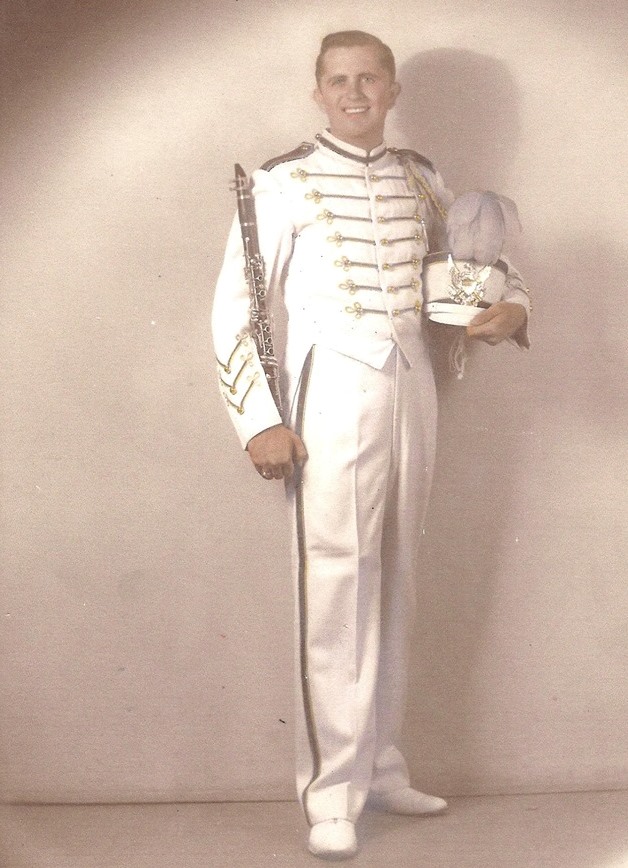 A good name is rather to be chosen than great riches, and loving favour rather than silver and gold.   Proverbs 22:1

John Bernard White, Sr., age 77, of North Palm Beach, Florida departed this life in the early morning hours of January 20, 2014. Mr. White graduated from Miami Jackson High School in 1955 and then attended the University of Miami where he earned his BBA, MBA, and JD. After graduating from the University of Miami with accounting and law degrees, Mr. White attended New York University and earned his LLM. He was recruited by Shutts & Bowen Law Firm, one of Miami’s oldest law firms, shortly before graduating from NYU and practiced law with the Firm for the next 40 years. Mr. White became a partner early in his career with Shutts & Bowen and eventually became a managing partner and opened the Firm’s first branch office in West Palm Beach, Florida.

After retiring from Shutts & Bowen and up until his passing, Mr. White continued to practice law and served as legal counsel to the three (3) Florida State Offices of the Church of God (Cleveland, Tennessee) as well as many independent churches throughout the State of Florida. He was a member of the Church of God (Cleveland, Tennessee) and served as a Youth Leader, Sunday School Teacher, Sunday School Superintendent, Choir Director and Council member in many of their local Churches in South Florida. Mr. White was preceded in death by his father, Reverend Porter M. White, a missionary and pastor for the Church of God (Cleveland, Tennessee); his mother, Margaret Mizpah White (Roberts), daughter of a Bahamian “Mailboat” Captain; and his sister, Mira Diane White.

One thought on “In Loving Memory of John B. White, Sr.”