Just a few weeks ago,  my family was blessed to spend the better part of a day on Green Turtle Cay.   It would be the first time my children would see the birthplace of their grandfather…a place that he reminisced of often.  We arrived by taxi to the Treasure Cay ferry dock for a fifteen minute ferry ride.  The anticipation built as we boarded Lowe’s Green Turtle Cay Ferry.  Owned by descendants of our Green Turtle Cay ancestors, it was the first realization that we were back to our roots.

As we crossed the Sea of Abaco, our eyes were peeled on the horizon for the first glimpse of this New England style seaside village.  I pondered on the stories Dad recounted as he and Pa Wes would make similar treks from the Cay to the mainland of Abaco to tend to their farmland.  Their journeys were not on engine-powered ferry boats but small man-made sailing skiffs, subject to the winds and changing weather conditions.

As the town of New Plymouth on Green Turtle Cay grew closer, the excitement triggered a flashback from over twenty years ago, when my wife and I made our first trip to Green Turtle Cay with Dad and Mom…

Twenty years ago, our youngest son and his wife, Dona, decided to take a vacation on the Big Red Boat. 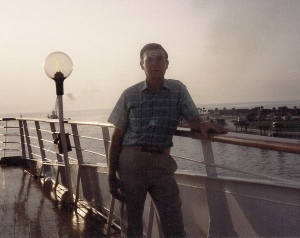 The destination was to Abaco in the Bahamas.  My wife and I were invited to join them.  I thought it would be nice to visit my birthplace, Green Turtle Cay.  Some of my family were living on that island.  The ship sailed from a port in the northern part of Florida and headed for Abaco.

The next day we had the privilege to go down to my birth place, Green Turtle Cay. It was a pleasant boat ride, about twenty miles to the West. On our arrival to the dock, there was the cottage that dad had built and the place where I was born and lived for sixteen years. Many thoughts came into my mind. I was overjoyed to be back home. 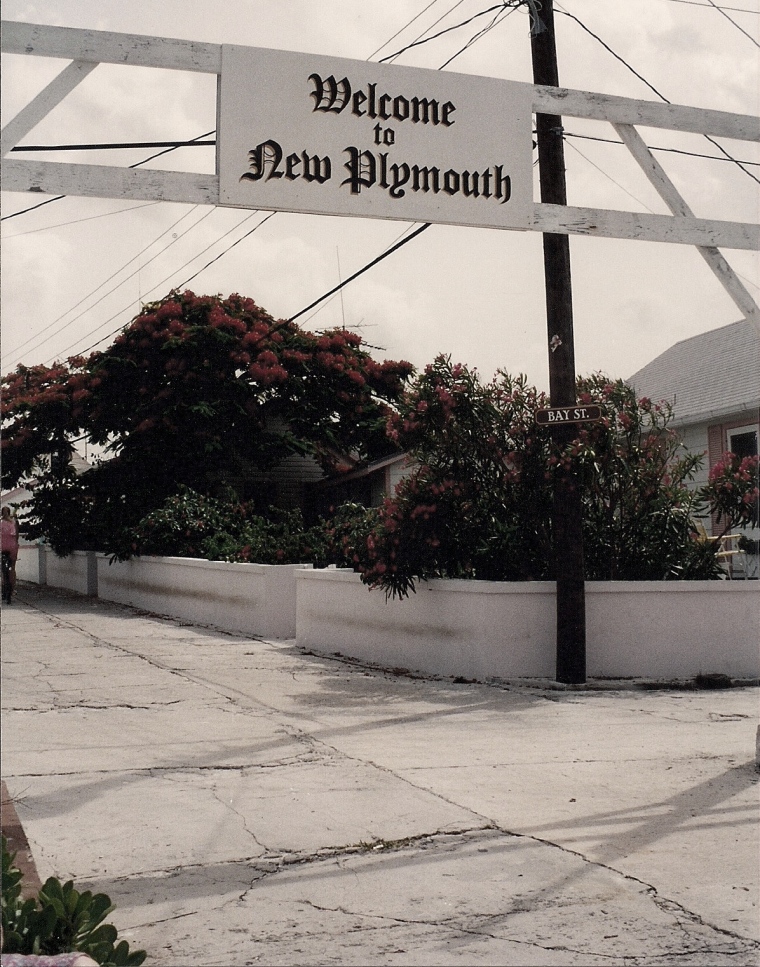 The first place we visited was at Noel and Ivy’s home. There we greeted each other and spent a little time together. They prepared lunch for us. Many years ago in Nassau, Noel and I would worked for the Maura Lumber Company. During that period we closed the store at midday on Fridays and prepared for our fishing trips. I cannot forget those experiences. We were successful in bringing back home an abundance of fish each time.

The second place we desired to visit was the cemetery. There, my dad and his fore parents are laid to rest. As we strolled in the cemetery, we came to a large tombstone. It was the place where my great great grandmother was buried. Her name was Bianca Curry Lowe. She was the great granddaughter of John Walker, who came from Ireland to the USA. We were very glad to find her grave site.

From there we walked up the hill. We had to go up thirty steps to the school building. It was the first time for my son and his wife, but for me, it was a reminder of the ten years of my life attending school.

The next decision we made was to visit the cottage I knew as home for sixteen years. Upon our arrival, the owner of the building gladly let us have a tour of the house. It was the first time that my son and his wife had the privilege to see this small cottage where I spent those early years. It was indeed a great joy for me to be at that cottage possibly for the last time.

As we stepped off the ferry onto the shore of New Plymouth, I was overwhelmed with a sense of responsibility – the baton had now been handed to me twenty years later.  Off we went with our backpacks, Tervis tumblers, iPhones and digital cameras ready to record every memory – times have changed from the Kodak roll of 24 that we used to capture that first visit. 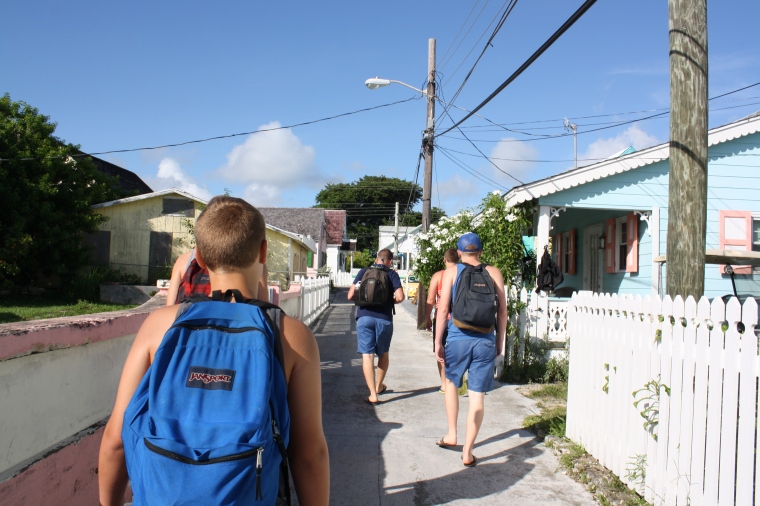 Our first stop – a quick breakfast snack – fuel to power our walk around town.  Recommended by Little House by the Ferry, Mo-Mo’s Suga’ Shack seemed like the perfect spot.  No doubt, an old cottage remodeled and converted into a charming store front.  While the seating capacity was nearly maxed out with our family of eight, the display of homemade bread and fresh pastries quickly grabbed our attention…cinnamon rolls, cheese and guava pastries.  We were off to a good start. 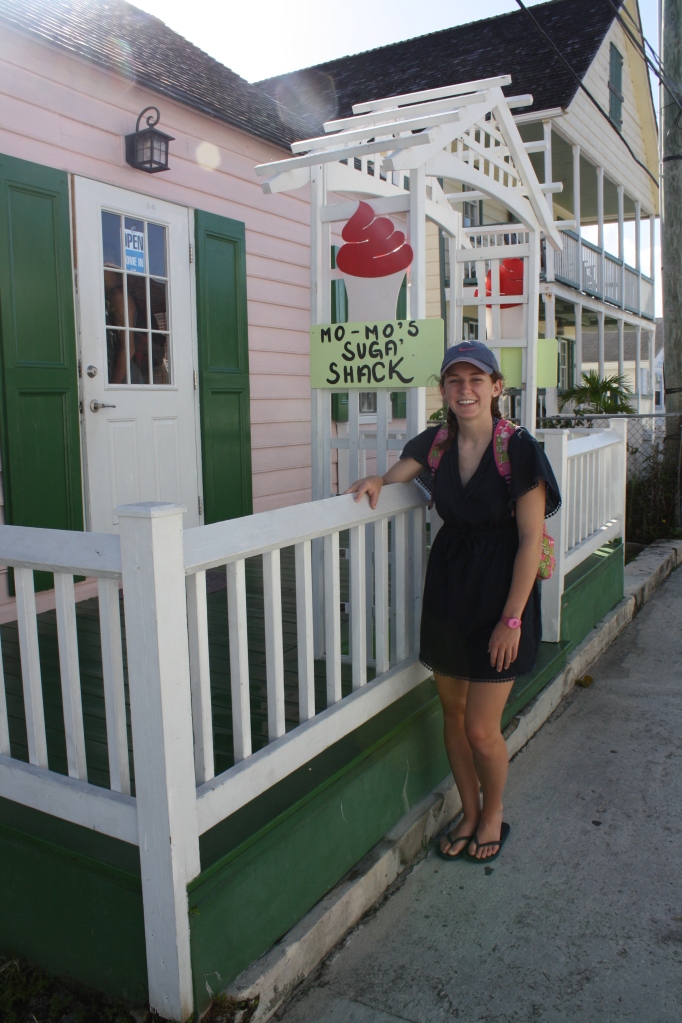 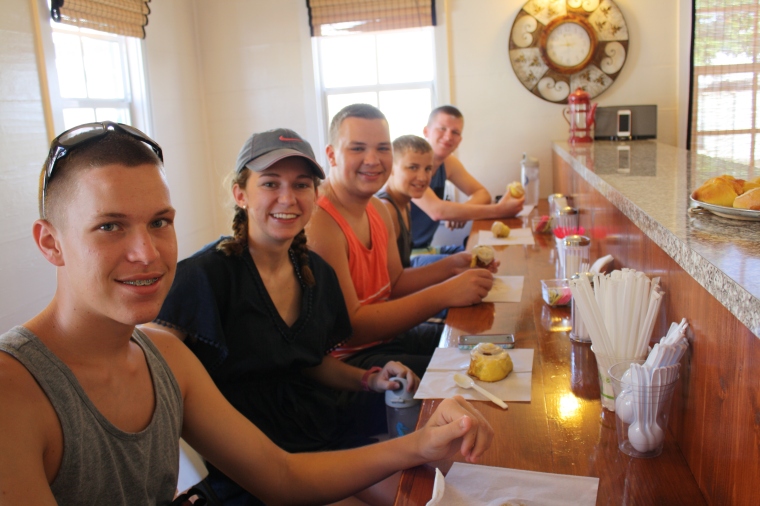 With our tummies full, we embarked on a tour of the narrow, picturesque streets of New Plymouth.  It was quickly obvious that we were walking paths steeped in Abaconian history.  Paths that our ancestors had travelled for at least five generations.  So much history is nestled in this quaint village and so much of it relates to my ancestors.

After a stop at Lowe’s Food Store to

visit cousins, we headed to the cottage where my Dad was born.  A modest but charming 900 square foot cottage, surviving the Category 5 hurricane of 1932, stood before our eyes.  Although a picket fence, new windows, a cistern and some window a/c units have been added since Dad’s era, the structure remains the same.  The upstairs with its dormer windows was where Pa Wes lived after Dad’s father passed away.

While walking the streets, I saw a familiar face heading towards us with shopping bags in hand.  The strong Lowe facial characteristics cannot hide.  Dad’s first cousin…Pearl Lowe.  Pearl’s father, Osgood and my Dad’s father, Howard were brothers, growing up together on the Cay and working together on the mailboat M/V Priscilla.  Pearl was overjoyed to see us, and we stepped inside, out of the heat of the sun, to listen to her reminisce about family, past and present.  She remains a strong, faithful, godly lady that bridges the generations.

Afterwards, we decided to visit the local cemetery.  As ironic as it sounds, the cemetery there is a beautiful stop.  Although, weeds and tombstones provide a vivid reminder of the curse of sin, the surrounding sea, sky and shore remind us the beauty of the Creator, who provides everlasting life. 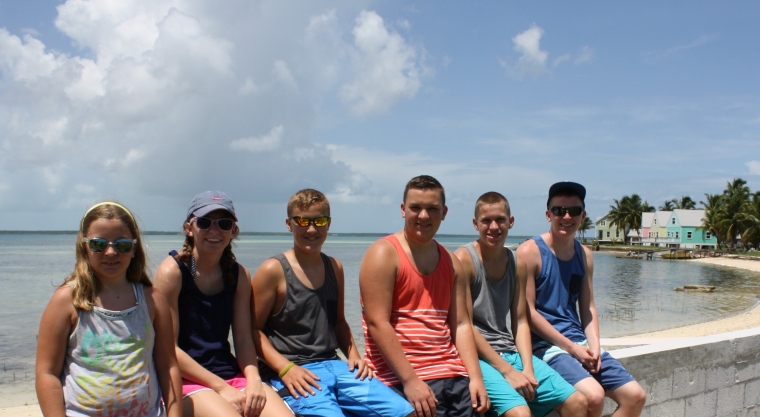 Afterwards, we connected with Kool Karts, a local golf cart rental company.  Yes, owned and operated by cousins.  The transportation was a welcomed relief after walking the streets for couple hours in the summer heat.  We were now able to travel to other parts of the Cay.  We drove through Black Sound on our way to the Green Turtle Club located on the White Sound harbour.  As we sat down to enjoy a  fabulous lunch of cracked conch, peas ‘n rice and macaroni, a local thunder storm swept in to cool things down.  By the time we were finished eating, the rains had subsided enough for a photo opp and the purchase of some fresh conch salad made before our eyes by a local vendor.

On our way back, we parked along the road and walked down several beach paths, admiring the exceptional beauty and collecting beach treasures along the way.  Next stop was the school house at the top of the hill.   (Stay tuned for an upcoming article regarding Dad’s school days).

The rest of the afternoon was filled sightseeing, shopping, another stop to Mo-Mo’s for ice cream, and a stop to Lowe’s Food Store for drinks.  We returned the golf carts and headed to the dock to catch the last ferry back to Treasure Cay.  No words could have been more relevant to see as we prepared to leave…Remember These Shores.