I turn the dial back to the year 1884 and to life for some on the isolated island of Green Turtle Cay, Abaco, Bahamas.  At that time Queen Victoria reigned over the United Kingdom of Great Britain – this included our Bahamas colony.  Grover Cleveland won the presidential election in the United States, and the cornerstone was laid for the arrival of Statue of Liberty.  The US Consular Reports, accounting for exports (in dollars) to the United States provides a glimpse of exports from Green Turtle Cay in their 1884 report.  Sniff  the aroma of those pineapples!

My great grandfather, Wesley Curry (Pa Wes) celebrated his 19th birthday in February that year. Later in November, he and great grandmother, Lilla Carleton Curry, welcomed a baby girl, Eudora “Dora” Isabel Curry.  Before long Dora played on the shores of New Plymouth while her dad undoubtedly contributed to those exports with his farming and fishing skills.

In 1887, their second child, a son, was born.  However, this son’s unfortunate death in just a few months brought heartache to this young couple.  The death register noted the cause of death as “Teething.”  Pa Wes and Ma Lilla persevered through this adversity and were blessed with four more children.  The last child, my grandmother, born in 1903.

A month before my grandmother was born, her older sister, Dora, married a Green Turtle Cay seaman, William Bramwell Roberts.  He had outstanding blue eyes.  Pa Wes, unable to write, gave his consent on the marriage register by his “X” mark. 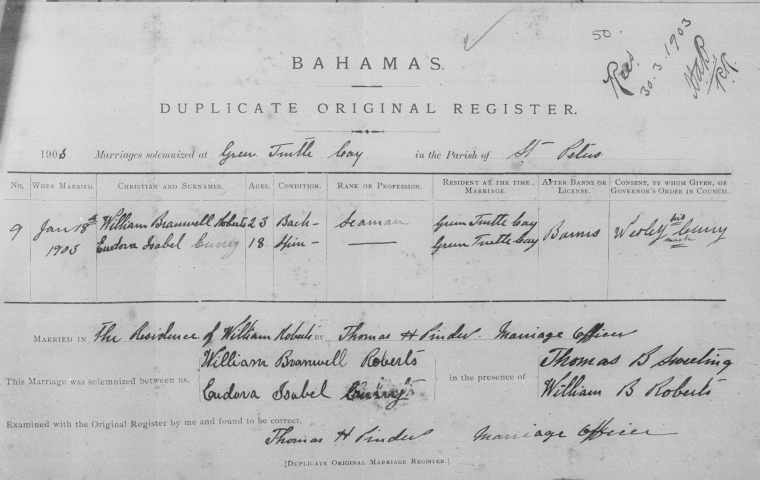 Dora and William’s union produced seven children. Tragedy claimed the lives of three of them.  Roy died from a ruptured appendix when he was seven.  His brother, Hubert, fell as a toddler and died from a head concussion.  The youngest child, Effie, died about six weeks after birth.

The four surviving children, Vernie, Tessie, Bertha and Anthony grew up on the shores of Green Turtle Cay with their first cousin, my Dad, John.  Years later, Anthony pursued Dad to be the General Manager of a furniture store in Nassau. The business grew over a period of 20 years before Dad retired and moved to Florida.

Dora’s husband, William, descended from a long line of seaman – his father and grandfather were sea captains.  The Category 3 Hurricane of August 1871  that struck Abaco killed William’s grandfather and two of his uncles, William and Thomas, plus 20 other mariners.  This disaster was noted in The Wesleyan Missionary Notices for the Year 1871 (Fourth Series, Volume III, London, Printed By William Nichols, p. 198).  On September 18, 1871, Reverend Henry Bleby reported the following:

The damage on the 16th was confined chiefly to Abaco.  Mr. Jordan thinks that the hurricane was as severe as that of 1866.  The Mission premises at Green Turtle Cay have not suffered much; but the loss throughout the island and amongst the spongers has been very sad.  Twenty-three men from the Cay have lost their lives, leaving fourteen families destitute.  One poor women lost her husband and two sons.

While the specifics of this calamity have been lost over time, the death register provides a visual of a community’s sorrow.  Many young men, perhaps more than one ship’s crew, lost their lives in that hurricane.  William’s grandfather (and namesake), the first and oldest on the death register list, may have been the captain of a vessel that floundered in the storm.  The Florida Keys Sea Heritage Journal, Volume 15, Number 4 states that “he (William Sr.) and his sons William Jr. and Thomas went out fishing one day and never came back.”  Dora’s father-in-law, Ned Roberts, continued his family’s exploration legacy as captain of a cargo ship.  Ironically, Captain Ned was also lost at sea in 1900.

William worked on the Abaco mail boat S/V Albertine Adoue operated by the Roberts family.  While William explored the seas, Dora managed a small store in their front yard.  She sold candy, gum, basic textiles and dry goods and tobacco.  When a kerosene refrigerator was added, cold sodas made a treat on a hot summer’s day.

Dora and William lived on Green Turtle Cay until moving to Nassau during the 1950’s.

A former Green Turtle Cay resident shared the following memories with me:

Dora and William had a small “convenience store” in front of their home.  During summer nights they, along with a few others, would sit outside the shop on benches and serve customers until they retired for the night. During the afternoons, school children flocked to their little store as they carried quite an assortment of candies.  Mr. William was a poet.  He would stop the school children to repeat poetry he memorized.  He walked with a cane.

A granddaughter shared these memories:

Grandpa’s father, Ned Roberts, was a ship captain, while Grandpa William worked on boats as a crew member. He’d tell me stories about the places where he had been.  He was the best grandpa!  He had a good voice. He and I would sit at the table and sing hymns by lantern light.

In 1957, their daughter Bertha, her husband and children moved into her parent’s Nassau residence.  They provided care for their ailing parents along with Tessie and Anthony.  When my parents would visit their home in Nassau, Uncle William would use the hook of his walking cane to latch on to my older brother’s leg.

Another granddaughter shared these memories:

Grandpa was the sweetest and kindest man I know. He was a quiet man.  Never spoke a harsh word.  Grandma was the opposite. She had a quick temper.  He was a tall man who loved to sit on the porch smoking his pipe.  The grandkids would fuss and get mad with each other for we all wanted to help him light his pipe. I loved to smell his tobacco when he would puff away.

Grandma died in 1959 after she suffered from a stroke.  One night, after her death, the housekeeper put Grandpa to bed. We could hear him talking in his bedroom. As the housekeeper headed to check on Grandpa, a gust of wind shut the door. She opened the door and asked him who he was talking to.  He said that he talked to Dora and that she asked him if he was ready to go home. Grandpa died shortly after.

The ocean explorer still talked with his helper Dora as he sailed on to his heavenly home.

5 thoughts on “The Explorer’s Dora”