For over a decade, our family vacations in an “Old World” Florida community called Boca Grande.  Located on the southwest coast, Boca Grande is situated on a barrier island called Gasparilla, named after the legendary pirate Captain José Gaspar.

The seven-mile tranquil island is void of traffic lights.  Pristine beaches stretched along the Gulf deliver a plethora of shell treasures.  Two historic lighthouses protect seamen who navigate the waterways.  In the early evenings, dolphins play along the shoreline as the Creator paints a masterpiece sunset.

Our family has built wonderful memories within this island community.  Shell hunting, beach football, park playtime, lunches at the Loose Caboose, and after Thanksgiving “pink” Friday sales are just a few of our family favorites. This year, however, our island getaway delivered an unexpected twist.

A visit to the unpretentious, welcoming Boca Grande Historical Society added more to the story.  We learned young Thomas Wilson Lowe ran away from home at the tender age of fourteen, the legal age to leave school.  He went to work as a cabin boy on a sailing ship that transported pineapples from Green Turtle Cay to Key West.

While in Key West, he met Eliza Matilda Stirrup, also a native Bahamian.  She had moved with her parents John Stirrup and Sarah Parker Stirrup from Spanish Wells to Key West.  The younger couple married in Key West in July 1889. 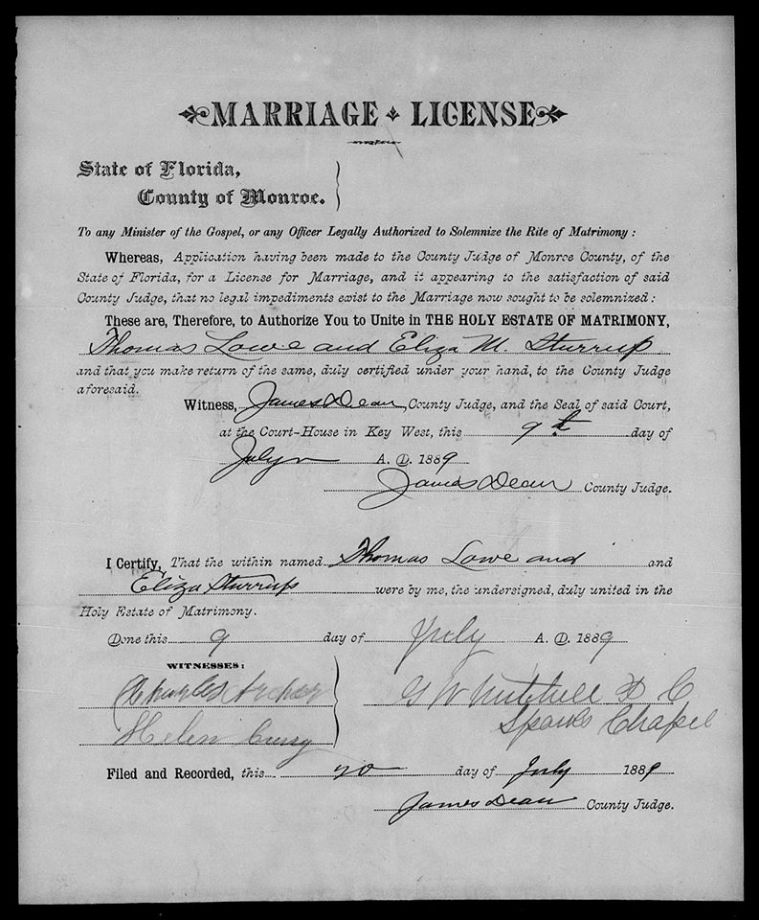 From mid-August to mid-January, Thomas would migrate to Florida’s west coast to fish for the mullet around Gasparilla Island.  Mullet was salted down in brine and placed in barrels.  Thomas sailed the barrels of mullet to Cuba to sell or trade for rum to sell back in the United States.  He returned to his Key West home when he wasn’t mullet fishing.  Thomas found other ways to supplement his income.  He ran freight up and down the west coast of Florida.  Grandson Freddy Futch born 1933 noted that his grandfather transported the lumber and other materials to build one of the two lighthouses on Gasparilla Island.

Thomas moved to Tarpon Springs to operate a fleet of sponge boats owned by a Tarpon Springs gentleman.  After a weekend family picnic at Anclote Key, the Lowes sailed home to Tarpon Springs.  Thomas navigated the larger sailboat with his wife Eliza and daughter Pearl.  An employee and son Brian (born 1898) used the smaller sailboat.  As they left the cay, heavy fog set in.  The smaller sailboat vanished.  It never arrived home.  When the fog lifted, Thomas searched for his lost son.  Brian and his sailboat were never found.  Thomas’ employee was miraculously pulled from the water.  On board, he died immediately.  Unfortunate loss.

Unable to resume life in Tarpon Springs, the grief-stricken Lowes established their home on Gasparilla Island in 1910.  Fond of the place where he had fished for mullet, Thomas and Eliza landed their sailboat on the northern end of the island.  They lived on their sailboat for several years. A tar-papered shack functioned as a kitchen to cook their meals.  They ate fish, oysters, shrimp, scallops, and crabs.  The family fished on the beach for mackerel and pompano with nets.  His grandson Freddy Futch recalled.

We only took from the sea what we could eat.  If we took too much, we carried it to the neighbors.  My grandfather would fish for stone crab in the winter.  He would catch these crabs alive and put ’em in pens and feed ’em until people bought the large claws from him.

Eliza was a fisherwoman herself.  Each morning after baking her Bahamian ‘light bread’ and cleaning the kitchen, she would take her fishing pole and potato sack out to the water to catch dinner.  Her grandson Freddy caught fiddler crabs on the beach for bait.

In 1914, Thomas built a three-bedroom home at Gasparilla Village.  The Lowes were one of the first residents in this new settlement.  With the building of the railroad, a new era dawned in the fishermen’s community.  Refrigerated train cars replaced the Cuban “smack” boats.

In 1943, Thomas Wilson Lowe passed away.  The Gasparilla Fishery moved its facilities to the mainland of Florida.  All the land at the north end of the island was sold to a developer.  A few fishing families remained on the island, including Thomas’ sons Albert (1912-1992) and Raymond (1916-1995).

Today Gasparilla Island offers us a thanksgiving place to relax, shop, dine, and unwind. This hidden paradise of beachfront vacation rentals and golf cart dominated streets is one of many coastal communities in Florida with a rich Bahamian legacy.