Pa Wes’ health continued to deteriorate and Grandma Bessie made the decision to seek treatment in Nassau.  Not knowing what the future would hold, she sold the homestead in Green Turtle Cay and with her son (my dad) and her dad (Pa Wes), set sail for Nassau, the country’s capital situated on the island of New Providence.

Upon arrival, the weary travelers sought respite in the home of Emmie Pinder, Grandma’s sister.  Aunt Emmie lived in the “suburbs” of Shirley Street.  With an exceptionally pleasant and outgoing personality, Emmie would soon introduce her new boarders to next door neighbors, Mr. & Mrs. G. Basil Lowe.

Dad recounted in his journal…

At the age of fifteen, my grandfather, Wesley became very ill.  A decision was made to take him to stay with his daughter, Emmie in Nassau, New Providence.  My mother and I went along on the mail boat. While down there, we got to know the family of Mr. & Mrs. G. Basil Lowe, who were neighbours of Aunt Emmie.  They had three girls and one son.  Little did I know that one of the girls would become my dear wife.

Grandma Bessie, a widow of 15+ years, would find love again in New Providence and in 1942 married Ashbourne Lowe, a fine carpenter by trade.

The newlyweds resided in a two bedroom home built by the groom in the Shirlea subdivision off Shirley Street, a few blocks away from Emmie’s home.  Dad, sixteen at the time, and a proud owner of a bicycle, peddled down Shirley Street to his new job at City Market on the corner of Bay Street and East Street.

Mr. G. Basil Lowe’s carpentry workshop was situated in back of his home on Shirley Street and equipped with the finest of tools.  His nephew, Renard, was this carpenter’s “right-hand” man.  Renard and Dad – just a few years apart in age – soon bonded and developed a lifelong friendship. Dad would often bike to the workshop to hang out with Renard.  During that time period, Dad started courting one of G. Basil’s daughters, and in 1951, Dad and Mom were married.

Working with a frugal budget, they were married by Pastor Davies at the Assembly of God parsonage off Shirley Street with the reception across the street at the home of the groom’s parents. Family and friends gathered around the modest home to share in the joyous occasion.

Mom located stylish platform heeled shoes from along the storefronts on Bay Street where she found a seamstress to fashion a wedding gown for that special day.  Family members lent their creative talents and added a special touch.  Grandpa Basil’s sister, Aunt Winnie crafted the wedding arch from Coconut fronds and other tropical foliage while older sister, Marie delicately constructed the bride’s veil.  A bouquet of white gladiolas served as the bride’s bouquet. 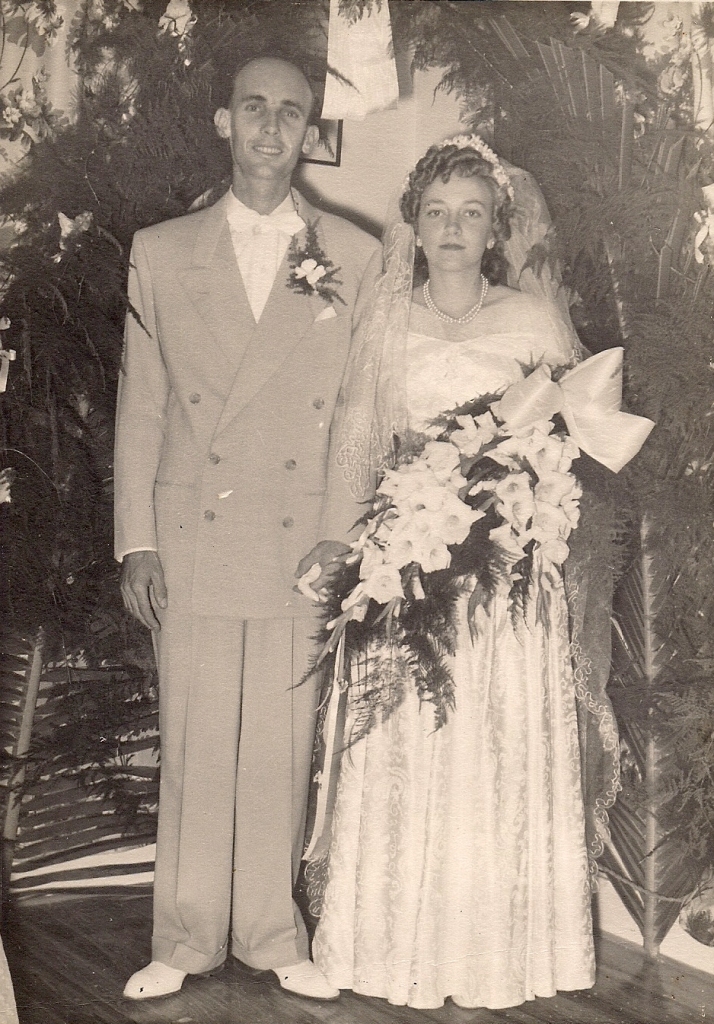 On March 2, 1951, two loyalist descendants made a vow on Shirley Street that would last over 60 years.  After the wedding, Grandma Bessie moved back to Green Turtle Cay while Mom and Dad settled into the house in Shirlea and began their lifelong journey together.