It is often repeated that all Lowes in the Bahamas descend from patriarch Captain Gideon Lowe born in 1755 on Harbour Island, Eleuthera.  After an 1806 hurricane that devastated Harbour Island, Captain Gideon with wife Nancy and their 10 children departed on their vessel Carpenter’s Revenge to start life over on Green Turtle Cay, Abaco. 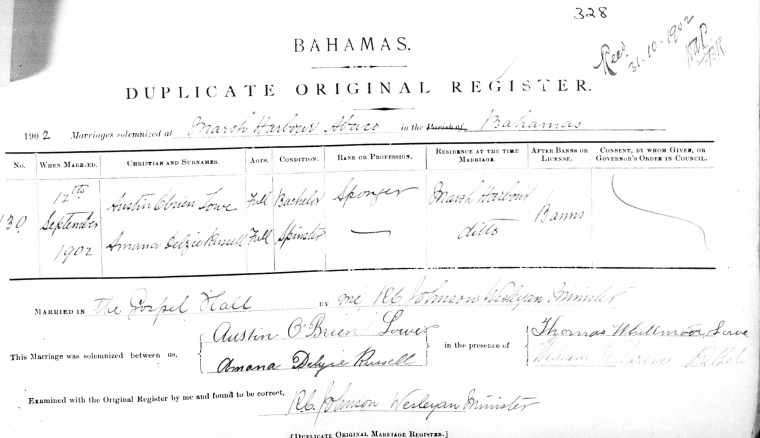 When son Reginald turned 25, he married his hometown sweetheart Lola Melba Albury.  Their union produced eight children, five girls (Pearl, Esther, Evelyn, Patricia and Delcie ) and three boys (Donald, Allan and Emil).  Firstborn Pearl died as an infant.  Like so many Abaconians, Pa Reggie farmed and fished to provide for his family.

Earlier this December, Reggie and Lola’s eldest son, Donald Reginald Lowe (1934-2015), finished his course on this earth. The following excerpts are from Donald’s eulogy and obituary…

Donald Reginald Lowe known to many as Mr. Lowe, Donnie, Uncle and papa was born to Reginald “Reggie” and Lola Lowe in the quiet settlement of Marsh Harbour on May 31, 1934.  As a young boy, Donald loved to hunt and fish.  He started work at age 14 to help support his family.

He attended the Marsh Harbour Public School where he completed his primary education under Mr. Berge Neilly. At break time he would play marbles and spin tops with the other boys, including Lewis Key, Garnet Archer, Percy Archer, Gordon Hudson, Carroll Albury and Benny Roberts. 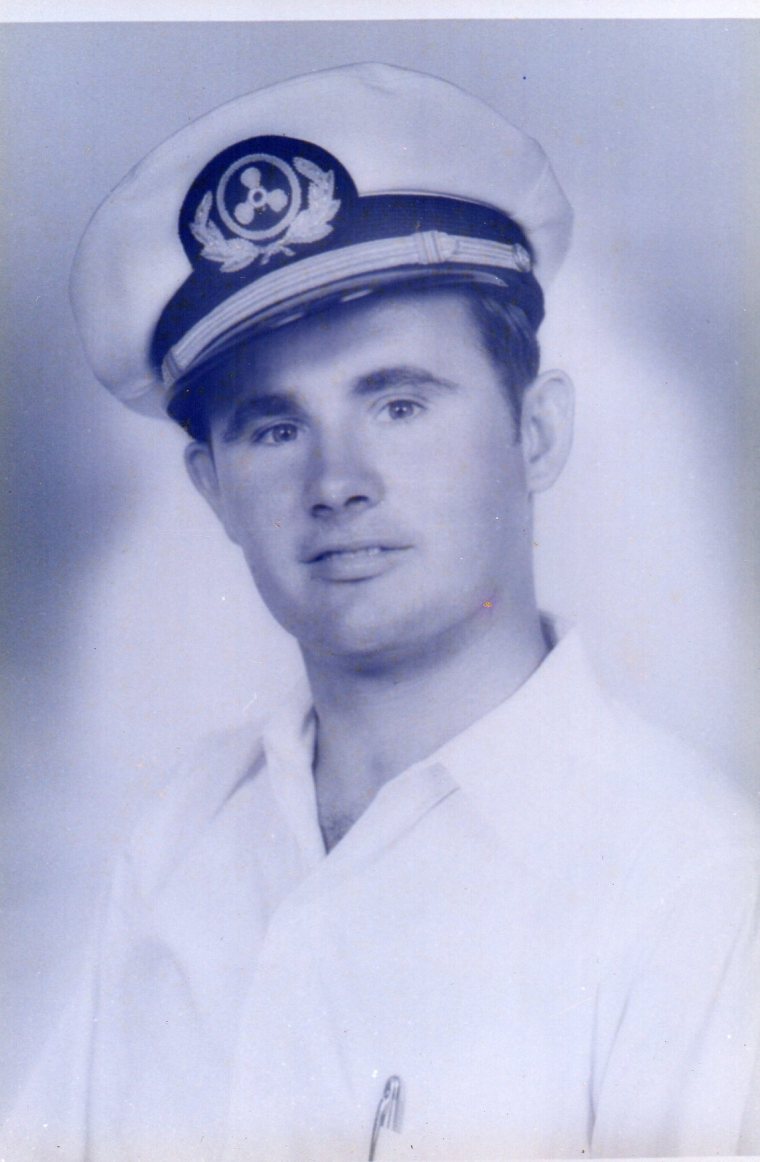 Donald’s dad, Reggie, moved the family to Israels during the summers so he could farm. They lived off what was grown and went to Green Turtle Cay and Hope Town to sell their produce.  Food was provided for them from the land and sea. Times were tough, but their needs were always supplied. Donald would go duck shooting with his brothers, Allan and Emil, his Uncle Chester Bethel, and brother-in-law Rowan Higgs.  Bill Swain, Donald’s friend, would often join them at Wills Cay.   Donald’s dad would make syrup while the boys were off on their adventures.

As a young teenager, Donald attended Bible Truth Hall where he accepted the Lord as his personal Saviour under the ministry of Bob Constable.  At the age of 14 Donald left school to work with his Uncle Lucien Stratton on the Almeta Queen exporting crawfish to Miami. Lucien became a second father to Donald. 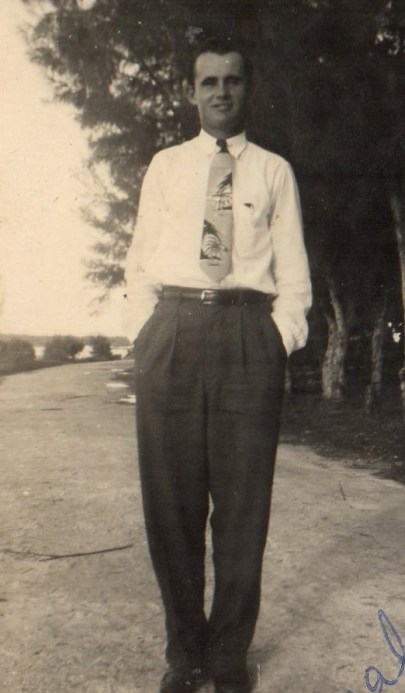 It was in Miami that they met with Mr. J.B. Crockett and persuaded him to come to Marsh Harbour in search of farmland. These operations provided employment for many locals.  Mr. Crockett bought the Nelvana Queen, a 112 ft boat that was chartered by an oil company to go down to Lake Maracaibo, Venezuela to find oil. Captain Lambert Sands of Man-O-War Cay along with Donald as his engineer and Carroll Albury as second engineer and a  crew were off on a five month trip…an experience of a lifetime. When Donald returned home, he was able to finish his house he had already started to build.

Working with Sea Breezes Co. in the mid 50’s, Donald assisted with construction of the Marsh Harbour Airport as well as many other road and infrastructure projects in the North of Abaco, Coopers Town, Fox Town, Green Turtle Cay and Treasure Cay.  He worked alongside with Edwin Lowe, Phil Lowe and Trevis Curry.

On July 23, 1957, after a seven year courtship, Donald married the love of his life, Carolyn Ann Lowe at Central Gospel Chapel in Nassau, Bahamas.  Their union was blessed with a son, Brian (1961-1984) and a daughter Emily. 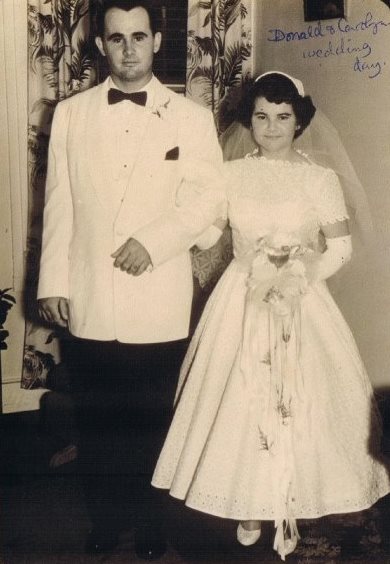 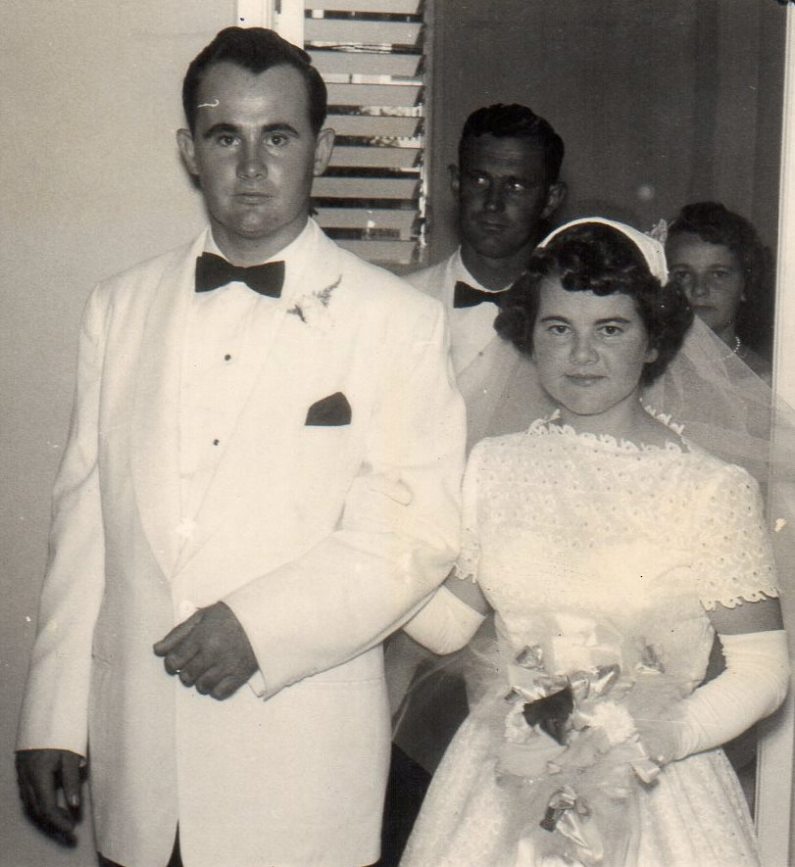 In 1961 Lucien and Stuart Stratton, founders of Sea Breezes Co., went to Long Island to construct the airport and roads on Deadman’s Cay.  Donald along with Edwin Lowe, Phil Lowe, Dave Collins, Zephie Duncombe and Joshua Tinker had no time to waste to get this work done.

The next project took them south where Diamond Crystal was starting salt operations.  Billy Thompson joined the crew and they constructed salt pans as well as an airport there.  Bruce Darville provided dynamite blasting for the jobs.

After finishing the job there they went to North to Stella Maris and constructed the airport and roads there. These various projects on Long Island enabled them to hire many of the locals thus boosting the local economy.  While working on Long Island, they were also building a subdivision called Bahama Sound, Exuma.

By the end of 1965, the company finished their work on Long Island and was contracted out to Morton Salt Co. in Inagua, constructing salt pans as well as a new airport. Edwin Lowe and Donald stayed together during this time. The people of Inagua and Mayaguana were noted as hard workers and many friendships were made. 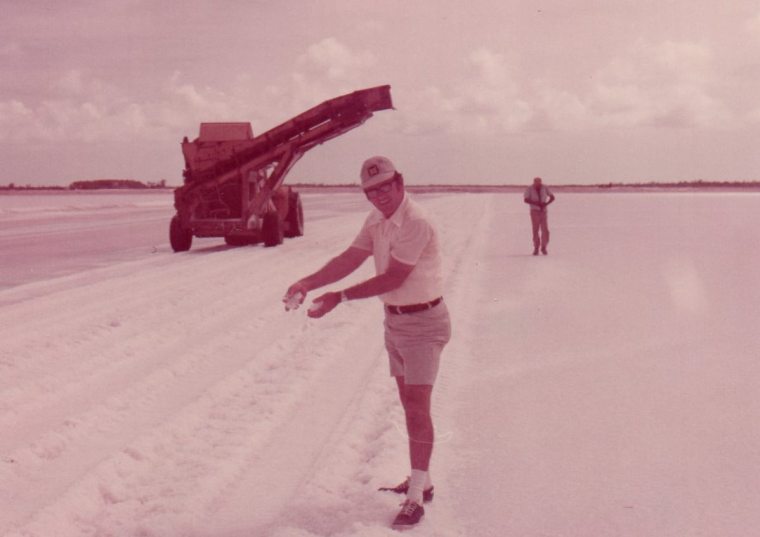 During his commutes to Long Island or Inagua, Donald would often stop in Nassau to visit with his Uncle Roscoe and Aunt Roselyn or his Uncle Jack and Aunt Thelma.

In the mid 1970’s, Donald bought a 31 ft. Betram boat, Tuffie, whom he treasured.  With his fishing buddy, Jim Lowe, they spent many days out at sea.  Harold Russell would often join him as well as many others.

In 1981, Donald opened B & D Marine store in Abaco. Sylvon Bethel was manager and nephew, Kevin Sawyer worked along with Gerard (Nelson) Lindor, later Carolyn joined them. Donald mentored Kevin, teaching him how to splice rope and giving advice.

In the early 80’s Donald was asked by Bill Farquharson to take on his last airport and infrastructure job, the  Abaco High Way and Treasure Cay Airport.

In 2007,  Donald had a heart replacement valve surgery.  Shortly afterwards B&D Marine store was closed, and Donald fully retired. He continued to enjoy fishing and hunting. 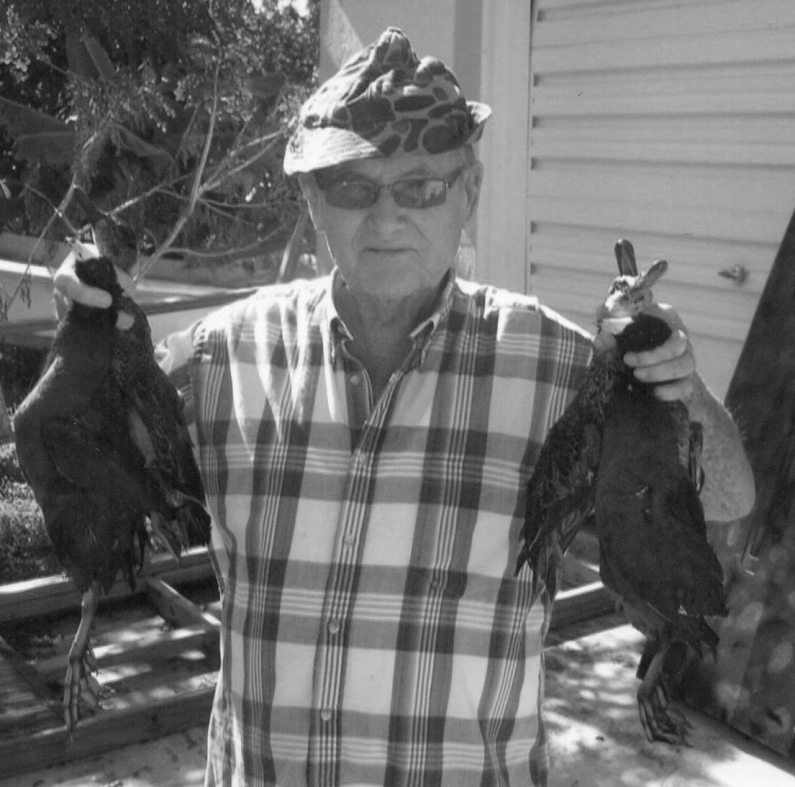 Donald loved visiting Great Guana Cay and visit with his daughter, Emily and family. He became very close to  Victor Bethel and his family.  You would often find the two of them enjoying a cup of coffee while talking politics with much laughter. Donald developed a closeness with the Guana Cay people.

In 2012, Donald broke his hip.  His nephew, Faron Sawyer, flew him to Florida. Donald recovered well and adjusted quickly  with his walker. He enjoyed regular visits from his sisters, other family members and friends.

On December 5, 2015, Donald was called home by his Lord and Saviour.

Our families connected in the United States through mutual Floridian friends Bob and Joanie Weber, who regularly visited the Abacos.  Donald and Carolyn with daughter Emily and husband Sylvon enjoyed visits with the Webers, who lived in Palm Beach County, Florida.  The Webers, who knew our common Bahamian roots, facilitated an easy introduction and a quick cousin discovery. 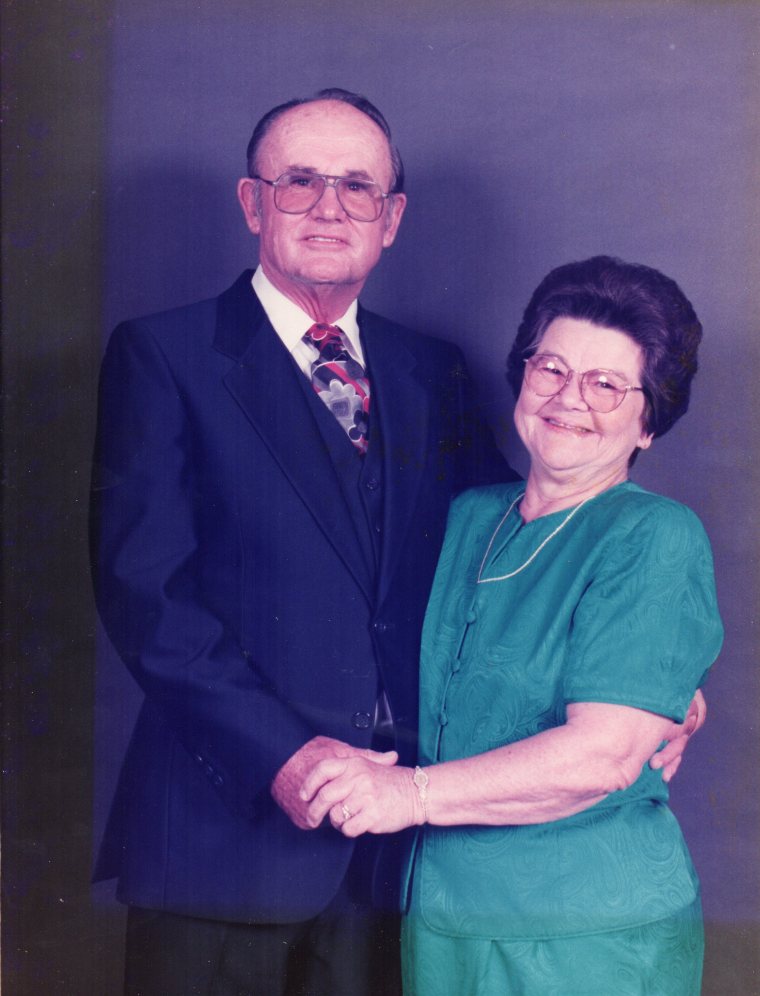 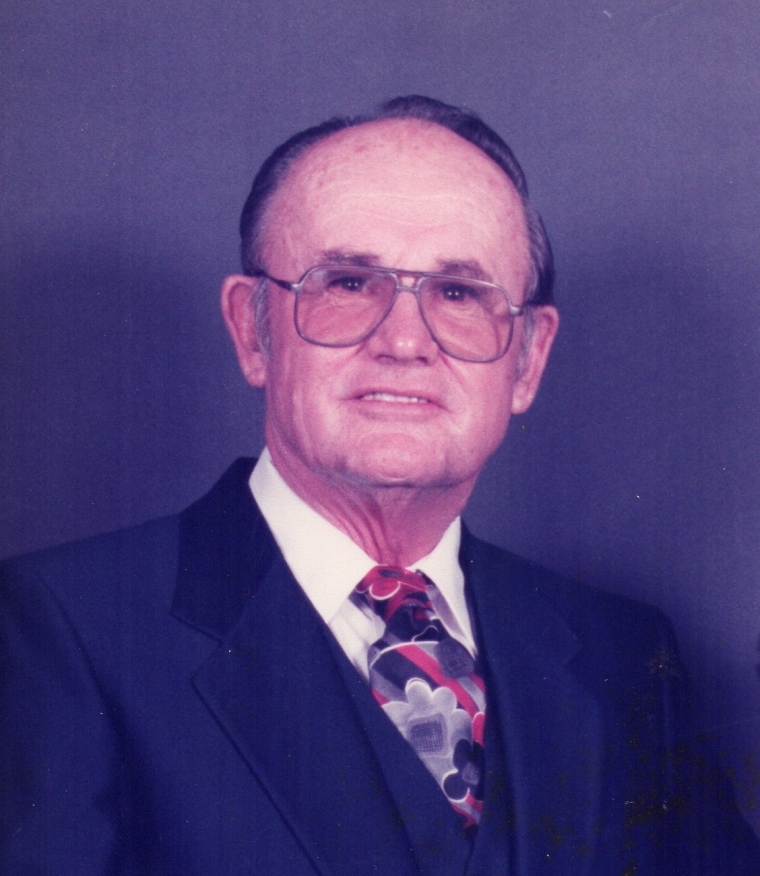 Special thanks to Donald’s daughter Emily, who graciously shared her Dad’s memoirs.

When the trumpet of the Lord shall sound, and time shall be no more,

And the morning breaks, eternal, bright and fair;

When the saved of earth shall gather over on the other shore,

And the roll is called up yonder, I’ll be there.

(Hymn excerpt sung at the service for Donald Lowe)

One thought on “Donald Reginald Lowe”